A-Chan (あーちゃん) is a minor character in Little Busters! and a heroine in Kud Wafter. She used to be in the position of Kanata Futaki as the head of the girls' dormitory, but she was succeeded when she became a third-year.

She wears the same uniform as everyone else. But because she is a third year student, it has a blue ribbon instead.

A-chan is a third-year who was formerly the head of the girl's dormitory and most people call her A-Chan Senpai because she is a third-year as her real name is unknown. Since she resigned from being the dormitory head, the dormitory rules have become somewhat more relaxed, but she still aides Kanata Futaki because she inherited the position. A-chan is the president of the home economics club, which Kudryavka Noumi is a member of, and she likes interesting and strange things. 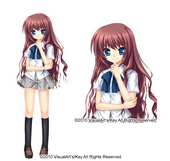 Kud Wafter Version
Add a photo to this gallery

Retrieved from "https://littlebusters.fandom.com/wiki/A-Chan?oldid=14995"
Community content is available under CC-BY-SA unless otherwise noted.