Like Kanata Futaki, Haruka is a pale-skinned girl with magenta hair that is tied in two ponytails with two clips in her hair at her forehead to differ her appearance from her sister and dark blue eyes.

Her school uniform is the same as the other girls with the exception that she wears striped stockings.

Haruka is a schoolmate of Riki Naoe from a different class, but despite this, always seems to find time to hang around in Riki's classroom. She is a problem child and will start an uproar for her own personal enjoyment, which causes Kanata Futaki (the public morals chairman and Haruka's twin sister) to often chase after her. She use marbles as a weapon to distract the public morals committee from chasing her, and when Riki is with her, she will drag Riki away, explaining that being captured by the public morals committee means big trouble for her.

The truth is, she was abused by her family (not her parents, who were kept away from her and Kanata), while Kanata was seemingly treated very well, though truthfully she was not. She thus starts trouble to bother her sister and shame her family name. She works part-time in the school's cafeteria to get permission to use the oven to bake muffins and cakes. 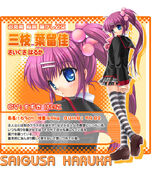 Retrieved from "https://littlebusters.fandom.com/wiki/Haruka_Saigusa?oldid=15156"
Community content is available under CC-BY-SA unless otherwise noted.