Kengo Miyazawa (宮沢 謙吾, Miyazawa Kengo) is the fourth member of the Little Busters, the current school kendo champion and a rival of Masato Inohara.

Kengo is a tall, young man that has gray hair and blue eyes.

Instead of using the standard male uniform, Kengo almost always uses the kendo uniform. When he broke his arm, he also started using a red jacket with the Little Busters icon on its back.

Kengo is a member of the Little Busters. He carries an air of honor and sophistication, complementing the physical prowess he evinces in being (self-allegedly) undefeated in 100 matches of kendo. On the other hand, he can be quite naive and childish. Just like the others, all he wants is to have fun. Still, he tends to wear a calm, mature facade, acting as a tsukkomi for the most part. Kengo is recruited after Masato Inohara, Kyousuke Natsume and Rin Natsume defeat his father, making him the fourth member of Little Busters. Kengo gets into a disagreement with Kyousuke's method of strengthening Riki Naoe and Rin, which eventually proves to be too tough for Rin.

In Refrain, when Rin breaks down mentally and Kyousuke's plan has backfired on him, Kengo tries to find a way so that they can keep living in the artificial world indefinitely rather than letting Riki and Rin face the harsh reality in the real world. The arm injury bandage he had in Refrain is a fake. However, after he is defeated by Rin in a baseball game, he realizes how strong Rin has become. He later regrets his action and breaks into tears, remembering how Kyousuke saved him from his eternal path of kendo by defeating his father, and rejoins the Little Busters. During the school excursion, he saves Rin in the real world during the bus accident. 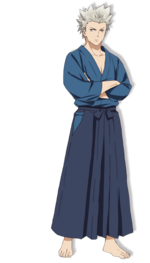 Retrieved from "https://littlebusters.fandom.com/wiki/Kengo_Miyazawa?oldid=15167"
Community content is available under CC-BY-SA unless otherwise noted.