Komari has chin-length darkish-blonde hair that she ties two red ribbons with "wishing" stars in her hair to hold her two bunches/half-twintails and blue eyes.

Her uniform appears different to the ones the other girls in her school are wearing, as she uses a yellow jumper above her normal school uniform.

When outside of school, she sometimes wears a lolita style dress colored in black and white, that typically features many frills and ribbons. She wears the same red-and-white hair ribbons for her half-twintails when wearing it, like usual. Just like her school uniform, this dress comes with black stockings, with the difference of having white frills at the top. As shoes for this outfit she chooses black platform shoes. When Komari is standing near or beside Rin Natsume, Komari is half a head taller than her and she is also a little bit older than Rin [1].

Komari is very childish for her age. She has a great interest in fairy-tales, picture books, candy and clothing with many layers of frills. She is very clumsy and will often not think before she acts. Komari is famous for her happy-go-lucky personality. She usually seems to be happy in most situations, and even knows a lot about theories involving happiness. She is sweet, caring, kind and friendly towards everyone, which makes it easy for her to get along with others. For this reason, Komari has a lot of friends where her kindness is also shown by her willingness to help the elders at the care center, which caused her to be loved by the elders.

However, this personality hides a past where she was traumatized by the death of her brother. For her innocent character, Komari hates death and bad endings. This was shown when she was crying over the end of the Little Match Girl that Takuya Kamikita read to her and became even worse through his death. This event caused her to suffer a post-traumatic stress disorder, which gets triggered whenever she encounters death or sees blood. It severely changes her happy-go-lucky personality into a very long phase of depression. She would deny her brother's death and try to convince herself that it was all a dream, and would then see other people as her brother or simply forget about it. However, this would always keep repeating again and again after she sees something extremely unpleasant.

Komari does well in her studies and who is also surprisingly athletic, although this is somewhat hampered by the fact that she is quite weak and has never participated in any sport properly. This is clearly shown when Komari was able to throw precise and moderately strong pitches one after another after Kyousuke Natsume had just shown her how to do so a few times.

In her route in the visual novel, Komari tries to recover her lost memories about Takuya Kamikita (Komari's older brother). As Riki Naoe helps Komari with looking after the elders, he gradually gets on somewhat friendly terms with Kojirou Kamikita (Komari's presumed grandfather). At some points, he gives Riki a hint that Komari's brother, whom both Riki and Komari believed to be alive until now, is dead. Walking down the street with Komari, Riki finds a dying kitten near the road. Riki tries to find something to cover it up from the rain, but fails to do so in time; the kitten's death triggering the depression syndrome in Komari. In order to ease Komari's tragedy, Riki draws a picture book for her, which leads Komari to believe that Riki is her brother. Having been consulted by Kojiro, Riki openly states the fact that Takuya is dead to Komari, telling her to face the reality. This way Riki finally cures Komari's trauma as she comes to peace with the sad fact.

In Refrain, after Rin remembers everything in her final dream, she rushes to Komari, who gives Rin Natsume her hair ornament, before disappearing, telling her to be strong. 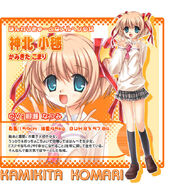 Komari in the Visual Novel Version

Komari in the Animation Version
Add a photo to this gallery

Retrieved from "https://littlebusters.fandom.com/wiki/Komari_Kamikita?oldid=15140"
Community content is available under CC-BY-SA unless otherwise noted.