Kud Wafter (クドわふたー, Kudo Wafutā) is a spin-off of Little Busters!, expanding the scenario of the title character Kudryavka Noumi. It was released by Key, as an adult game for PC, in Japan, on June 25th, 2010. Recently, an all-ages edition was released. The anime adaptation was released in November of 2020.

Kud Wafter is Key's eighth game, along with other titles such as Kanon, Air, and Clannad. The game was ported to the PlayStation Portable in May, 29, 2013. The story follows the lives of high school students Riki Naoe and his close friend Kudryavka Noumi, as they start to see more of each other in a romantic relationship. The gameplay in Kud Wafter follows a branching plot line which offers pre-determined scenarios with courses of interaction, and focuses on the appeal of the title character Kudryavka, also known as "Kud" for short.

The game is a spin-off of Key's earlier adult game Little Busters! Ecstasy, which itself is an expanded version of the original Little Busters! game rated for all ages. Kudryavka appears as a heroine in both Little Busters! and Ecstasy. Kud Wafter is an expansion of Kudryavka's story after the events of Ecstasy and is written by Chika Shirokiri. Na-Ga and Itaru Hinoue returned as co-art directors. The game ranked as the best-selling PC game sold in Japan for the time of its release. A manga adaptation illustrated by Bakutendō began serialization in the May 2010 issue of ASCII Media Works' Dengeki G's Magazine.

Kud Wafter is a romance visual novel in which the player assumes the role of Riki Naoe. Its gameplay requires little player interaction as much of the game's duration is spent on reading the text that appears on the screen, which represents the story's narrative and dialogue. Every so often, the player will come to a point where he or she is given the chance to choose from multiple options; depending on the choice the player made, different scenes are seen in the game. Text progression pauses at these points until a choice is made. To view all plot lines in their entirety, the player will have to replay the game multiple times and make different choices.
The game is split into two sections: "Wafter" and "After". On the first playthrough, only Wafter is available; after this is completed After becomes available. Both tell a similar story but in a different way; each has unique scenes and the ending is different for both sections. In the adult only version, Wafter contains a lot of sex scenes with sexual CGs; while After is more serious and has only a few sex scenes at the end. 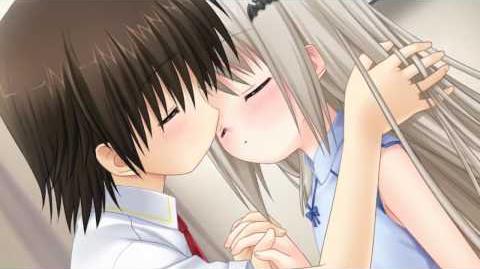 Retrieved from "https://littlebusters.fandom.com/wiki/Kud_Wafter?oldid=15180"
Community content is available under CC-BY-SA unless otherwise noted.