Out of all the girls of the entire Little Busters, Kud is the most unique girl with long flax colored hair with a small bat clip, blue eyes and she is the smallest girl of the entire group.

What makes Kud unique is her uniform. Unlike the other girls, she uses a white hat, a white cape with a bow when she is not in classes and white stockings.

Kudryavka, also known as "Kud" for short, is a girl who is a quarter Japanese and three-quarters Russian where her grandmother is Japanese and Ivan Strugatskaya (Kud's grandfather) was crazy about Japanese culture and per his influence on her, she came to know much about Japanese culture too, including the language. Despite having a poor handle on the English language, she was able to skip a year in school due to credits obtained through studying abroad. She is Riki's classmate and is in the newly formed home economics club due to an invitation of the head of the dormitory she lives at with the other characters. Kudryavka and the dormitory head are the only two members, and since the latter is often too busy, club activities are suspended and Kudryavka is the sole active member of a club on the verge of being disbanded. Before joining the home economics club, Kudryavka had been a member of the furniture club until it was disbanded.

Kudryavka has two dogs: a large female Siberian Husky named Strelka, and a small Schipperke named Belka. The hat and cloak that she wears were handmade. She spent most of her childhood traveling around the world, and her home country is a small, fictional southern island closer to the equator; this is the reason for her hat and cloak — She finds Japan cold due to her country's climate. Her favorite phrase is "Wafu!".

Kud's name is Russian, but her home country is actually the former Soviet republic Tebwa, wagering its future on its space program. Kud's mother is a key figure in that space program, and is also the image of perfection that Kud strives for, commanding great knowledge and expertise, including English. Kud herself, however, apparently has a difficult time with the Japanese educational system so she's far from that paragon of academic excellence. She also must contend with the teasing and isolation associated with being a foreigner with Japanese tastes and poor English. Riki, however, stands up for her through all of this. 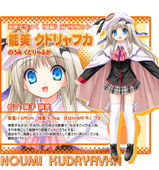 Retrieved from "https://littlebusters.fandom.com/wiki/Kudryavka_Noumi?oldid=15141"
Community content is available under CC-BY-SA unless otherwise noted.