Kyousuke Natsume (棗 恭介 Natsume Kyōsuke) is the leader/the original founder of the Little Busters and the older brother of Rin Natsume (by a year).

Kyousuke is a tall and good-looking young man with medium-length auburn hair and red eyes with the color of burning ember that reflect the burning intensity of his passionate ways. Like every other male student in the school (excluding Kengo Miyazawa), he wears the black, red-trimmed uniform coupled with a gold-trimmed, white-collared shirt and blue tie. Like nearly everyone else in the series, he constantly wears this attire, except when he and the rest of the Little Busters are practicing baseball out in the field.

Kyousuke is the leader of the Little Busters and the dynamo behind all the fun among their members. His exceeding competence in all aspects is complemented by a single-minded, fun-seeking demeanor and a deep-set, perceptive compassion. Ever since joining the Little Busters, Riki Naoe has looked up to Kyousuke as a role model. Even in Refrain, Riki's quest to grow stronger follows in Kyousuke's footsteps. He often comes up with absurd ideas, but almost always he follows up with a reasonable explanation along with it. He suffers from a brother-sister complex, as he wants Rin Natsume (Kyousuke's younger sister) to call him onii-chan (meaning brother in an affectionate way), but Rin prefers his actual name instead.

In truth, Kyousuke had planned that Komari Kamikita, Haruka Saigusa, Kudryavka Noumi, Yuiko Kurugaya and Mio Nishizono would eventually join the Little Busters. The plan was that he, along with the help of others, would create the artificial world in order to make Rin and Riki strong enough to face the reality. His methods, however, turn out to be too much for Rin, which eventually causes her to suffer from a mental breakdown after the time loop. In Refrain, Kyousuke starts lamenting himself after his plan backfires, but before the time loops back, Riki unconsciously vows to Kyousuke that he will become stronger than before. Remembering this, he starts to act like he is suffering from depression, much like how Riki was when his parents died. This makes Riki strengthen himself in order to care for Rin and to re-invite Masato Inohara and Kengo Miyazawa, who have gone their own separate ways, into the Little Busters again. In the meantime, he sometimes returns to the real world in an attempt to delay the bus explosion, and also at one time, helps Riki by dropping off a hint. After Riki manages to reform the Little Busters, Kyousuke is invited back to the group by Riki the same way Kyousuke had invited him several years ago. After Masato disappears during a game of baseball, Kyousuke reveals everything about the artificial world to Riki and Rin, who finally wakes up from the artificial world to face the reality. He is largely hinted to be Shun Tokikaze, the leader of the darkness executives in Saya Tokido's route. 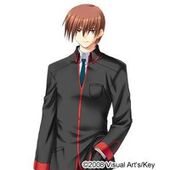 Kyousuke's Anime Version
Add a photo to this gallery

Retrieved from "https://littlebusters.fandom.com/wiki/Kyousuke_Natsume?oldid=15170"
Community content is available under CC-BY-SA unless otherwise noted.