Masato Inohara (井ノ原 真人, Inohara Masato) is the third member of the Little Busters, the roommate of Riki Naoe and a rival of Kengo Miyazawa.

Masato has black spiky hair with a red headband, blue eyes and he is the tallest character in the entire series.

His main attire consists of a red shirt, a black jacket and light blue jeans.

Masato is a member of the Little Busters and Riki Naoe's roommate. While played off as muscle obsessed and somewhat of an idiot, Masato is the most reliable and loyal of the Little Busters. He always relishes that first fight with Kengo Miyazawa, he is always ready to play with Riki or to take over the world with muscles and he relinquishes the room more times than anyone's college roommates combined. He has a particular fondness for Riki, which he is more than willing to express out aloud. He loves to work out and improve his muscle mass.

In Refrain, he left the Little Busters, thinking Riki is not strong enough to lead the group. After Riki questions him about what he is planning to do after leaving the Little Busters, Masato answers that he wants to prove that he is the strongest, and when he thinks about how he was defeated on May 13 and his will to become the strongest, it leads to his rampage, when everyone in his point of view becomes Masato, which in truth is his state of confusion on what he is living for. After he is defeated by Riki and Rin, Masato has a flashback about his past. He was bullied when he was little; he needed strength not to be bullied so he trained his muscles to be number one, but at the same time he felt lonely, and later wonders about what he is living for. One day, Kyousuke challenged him to a battle and he is defeated. After listening to Masato's story, Kyousuke invited Masato to the Little Busters, and Masato felt that his battle was over as he now had friends. Riki invites Masato to the Little Busters the same way Kyousuke did, and he agrees to join again. During the school excursion, he saves Riki in the real world during the bus accident. 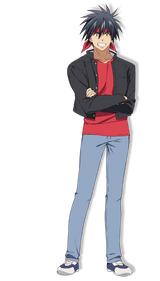 Retrieved from "https://littlebusters.fandom.com/wiki/Masato_Inohara?oldid=15034"
Community content is available under CC-BY-SA unless otherwise noted.