Mio is a slender girl with chin-length blue hair that has a red headband in her hair, amber-brown eyes and she is one of the smallest girls in the entire group.

Unlike the other girls, Mio wears the longest skirt and she usually carries a white parasol.

Mio is the soft-spoken, parasol-toting manager of the Little Busters team who is a severe bookworm, poet and apparently follows boys' love fiction, but she is also a calm girl who is very diligent. For an unknown reason, she is always seen with a parasol when outside. In the Common Route, she spends lunches reading and feeding birds, and sometimes has some handmade food for Riki Naoe. She also carries on a particular poetry collection book by Bokusui Wakayama that is old, grizzled, and so full of memories that she says it represents her "self." She enjoys reading, especially when the story contains boys love elements, and her room is filled with books.

In the real world, she was feeling guilty over having forgotten an imaginary friend she used to have, who comes to life in the artificial world as Midori. She uses the parasol because she is trying to hide that she has no shadow; this is due to Midori using Mio's shadow to materialize her own body. 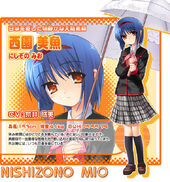 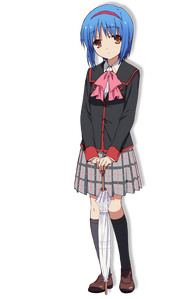 Retrieved from "https://littlebusters.fandom.com/wiki/Mio_Nishizono?oldid=15176"
Community content is available under CC-BY-SA unless otherwise noted.