Riki Naoe (直枝 理樹, Naoe Riki) is the main protagonist of the series and the fifth member of the Little Busters. In Little Busters Refrain he becomes Rin Natsume boyfriend.

Riki has a weak physical build - compared to his childhood friends Kyousuke Natsume, Masato Inohara, and Kengo Miyazawa - and is seemingly shorter than many of the boys in his year. His hair is straight and dark brown, hanging to the length of his ears. His eyes, gray-brown in colour, are comparatively larger compared to his male friends. Like Kyousuke and most other students, Riki wears a black, red-trimmed uniform coupled with a gold-trimmed, white-collared shirt and red tie.

Riki is the male protagonist of Little Busters!. He is the fifth member of the Little Busters, and of them, he is seen as the weakest due to his girlish appearance and fragile-looking body. However, he is the only one who is straightforward, acting with the most consideration and common sense among his peers. Riki is also seen as the most dependable and reliable member of the group, as he is always willing to support his friends through personal difficulties, helping them face their personal demons.

Riki's parents died when he was around ten years old, leaving him in a state of depression. Around the same time, he was diagnosed with narcolepsy, a disorder causing Riki to uncontrollably lose consciousness at random intervals. Around that time, he was invited to be a member of the Little Busters by Kyousuke. Emerging from his depressive state, in the guise of "preserving justice" and "fighting the enemy", he befriended Rin, Kengo and Masato - the three other members of the Little Busters.

In the visual novel, Riki begins as the weakest of the original five Little Busters members. However, his fighting attributes increase on each replay of the game, eventually matching and outgrowing Kyousuke's statistics. He consistently holds above-average values on the attributes of concentration and judgment, testifying to his ability to consider situations calmly, from a logical perspective.

What Riki lacks in physical strength, his compassion and generosity is able to compensate many times over. Although it is Kyousuke who is considered the "leader" of the Little Busters - a figure who Riki has admired and looked up to since joining the group - it is Riki who is assigned to recruit members for the Little Busters' baseball team. Notably, whilst gathering members is initially the responsibility of all the childhood friends, only Riki truly succeeds in doing so. Showing great compassion and assisting individual classmates during their greatest times of need, the assembly of enough members for a baseball game may be attributed solely to Riki.

Within the visual novel, Riki is able to uncover the stories of each of the girls he helps, earning the trust of and deepening personal bonds with each individual in the process. It is for this reason that the Little Busters rally around him, leading Kyousuke to entrust him with the role of leading the group during the baseball match. Within the anime adaptation, Riki is portrayed as enjoying platonic relationships with each of them, although playing various characters' routes in the visual novels often inserts a romantic aspect to his relationships. Regardless, it is possible to suggest that due to his overwhelming popularity, Riki is the glue that nurtures and maintains the friendships forged within the Little Busters.

Aside from his qualities of compassion, Riki is intelligent and reflective, capable of appreciating philosophical thoughts and considering questions of greater significance concerning the universe. He is able, for instance, to appreciate the beauty of the poems shared with him by Mio Nishizono. Riki's reflective nature makes him wonder what the "secret of the world" is, and about the identity of the person writing the notes received by Rin. (In contrast, Rin is seemingly pre-occupied only with finishing the tasks.)

Ultimately though, Riki is unaware of the elusive "secret of the world", a state of affairs seemingly known to all aside from himself and Rin. The world in which Riki had painstakingly recruited the female members of the Little Busters was not "real", but a construct in which time had stopped, although mimicking a time frame beginning from the beginning of the semester until the fatal bus-crash which would have taken the lives of all the friends. This world - in which time was an illusion - was created through the combined efforts of Kyousuke and the Little Busters, as a haven in which Riki and Rin would, through their experiences of solving the other characters' problems, be able to become stronger and as such, be able to deal with the tragedy. New constructed worlds would be formed again and again, with Riki repeating events, becoming stronger each time.

As a person of great insight, Riki is sometimes able to perceive abnormalities in the constructed world - such as the stoppage of time in Yuiko Kurugaya's scenario, and Kyousuke's disturbing influence over seemingly natural events. Ultimately however, he remains unaware of this "secret of the world". However, upon his last repetition, he vows to "become stronger" in order to protect Rin, who he becomes very close to.

His desire to "become stronger" allows Riki to reform the Little Busters in the distorted constructed world, after Kyousuke's harsh methods damage Rin psychologically. He is somewhat able to heal Rin's broken psyche and uncover the personal demons of his childhood friends Masato and Kengo. Finally, he draws Kyousuke out of his depression - from having failed previously - to reform the original group of five. Only then does he learn the "secret of the world" relating to the true nature of the construct he was perceiving - a construct intended to make himself and Rin strong enough to come to terms with the deaths of their friends.

Learning of the accident, however, Riki surpasses Kyousuke's expectations. Using intelligence and collectedness, in the visual novel, he is ultimately able to save the Little Busters in the real world in the context of the bus crash, showing his great selflessness. 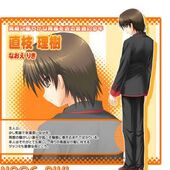 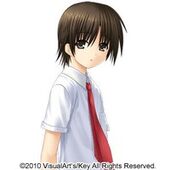 Retrieved from "https://littlebusters.fandom.com/wiki/Riki_Naoe?oldid=15190"
Community content is available under CC-BY-SA unless otherwise noted.