Rin Natsume (棗 鈴 Natsume Rin) is the main heroine in the series. She is the younger sister of Kyousuke Natsume and the second but only female member out of the five original Little Busters members.

Rin has long dark brown hair that has been tied in a ponytail. Behind her bangs she wears a small yellow bell, tied with a small white ribbon. Rin's eyes are brown with a red shade in the anime and clear red in the visual novel.

She is wearing the same, usual uniform as the other girls.

Rin is the main heroine in the story who does not communicate well and she is seen as inarticulate. Due to this, she is anti-social, and is usually seen alone. When playing baseball with the others, Rin is the pitcher of the group. She is one of the two initial survivors of the bus accident. She is girlfriend of Naoe Riki a member of the little busters.

Rin loves cats and at school takes care of several strays; it is not uncommon for several cats to crawl onto her. 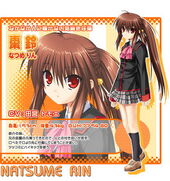 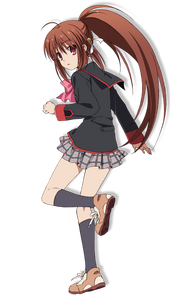 Retrieved from "https://littlebusters.fandom.com/wiki/Rin_Natsume?oldid=15169"
Community content is available under CC-BY-SA unless otherwise noted.