Yuiko is the tallest girl of the entire group with long straight black hair that has a yellow ribbon on the left side of her hair and her eye color is something between blue and purple. Besides being the tallest of the girls, she also has the biggest breasts, for that reason, she doesn't completely close her shirt.

Her uniform is the same as the other girls with the exception that she wears black stockings.

Yuiko is a self-sufficient, reliable and caring girl. For that reason she is seen as an older sister to everyone despite being the same age of almost the entire cast, and is referred to as Anego (Elder Sister) by Haruka Saigusa and herself. She is a very determined person, willing to break through any obstacles that are in her way. Riki Naoe sees her as a person that makes everyone around "conform to her pace". Though she mostly behaves like an adult, she never lets go of an opportunity to do something she considers to be funny. Yuiko likes pulling pranks on Riki and joking indecently about him, his behavior, or his intentions. She is fond of things or people she considers to be cute, such as several of the female cast of characters, especially Rin Natsume and Komari Kamikita, though the way she expresses her fondness sometimes exceeds the edge of decency. Yuiko is seen to be totally fearless which makes Riki wonder if there is anything that can discompose her. It is shown in Kurugaya's route in the visual novel that she is very protective of her friends and if someone pisses her off, she gets insane and drops any doubt about killing a person if he or she is the cause of her madness. Despite that, Yuiko regains her calm composure before she can actually commit a crime, which still doesn't cancel out the fact that she is truly fearsome when mad.

Yuiko is Riki Naoe's classmate who is sometimes seen carrying a replica of a katana called Muramasa. Yuiko's strength rivals Masato Inohara's as she is able to almost effortlessly blow a classroom door out of its mount; the consequences of such action had put Masato to awe. She is also seen as the most invincible member of the Little Busters, having plotwise defeated both Masato, Kengo Miyazawa and Kyousuke Natsume in the ranked battles, which traumatizes them. Yuiko's speed is enough to make anyone watching think she's translocating all over the place. Rin Natsume is also afraid of her since Yuiko is the only one who can contain and play around with her, much to Rin's dismay.

Yuiko gets high grades at school, especially in math, and is hated by her first year math teacher and several female students, who plan on bullying the Little Busters by first affixing nails and chewing gum to Riki's shoes. She is shown to excel at everything she does (even something like peeling apples or carving hares out of them), but that air doesn't last very long.

She was born outside of Japan, and raised western style by her parents, but is still entirely Japanese. She was given the birth name Elizabeth, which would often be shortened to Lizbeth as a nickname. 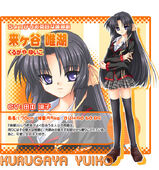 Retrieved from "https://littlebusters.fandom.com/wiki/Yuiko_Kurugaya?oldid=15184"
Community content is available under CC-BY-SA unless otherwise noted.