Yuuki has long black hair that has a hairpin in the shape of a satellite, brown eyes and a well developed chest.

She wears the female school uniform of the sister school she is from and she wears a lab coat most of the time.

Yuuki is a girl living at the dorms, whom Kudryavka Noumi knew and was roommates with for a time in Kudryavka's home country; Yuuki is half Japanese, a quarter German and a quarter Russian. She is the president of the science club at the school and came to take part in a cultural exchange program. Everyday, Yuuki is absorbed in various strange research projects and experiments and could be described as a logical genius.

Her mother was a space-related researcher; however the scientific community viewed her research as nonsense. She died in a space-related accident, where she sacrificed herself in order to save the data from her experiments. After her mother's death, Yuuki got in contact with Kudryavka's mother; who took care of her. Yuuki vowed to continue her mother's research, trying to prove it is not nonsense. For that reason, she attends Tebwa's astronautics school, where she meets Kudryavka; and the two of them start to get along very well.

At the school, Yuuki gets very good grades and is perfectly capable of becoming a cosmonaut in the future. However she is diagnosed with an incurable skin disease; which makes her unable to endure the harsh environment of space. Never able to become a cosmonaut, she entrusts her dreams to Kudryavka, whom she hopes to go into space in her stead. However around the same time as the diagnosis, Kud drops out of the school and runs away to Japan. Yuuki left behind alone and hating Kud's behavior to always run away; follows Kud to Japan.

She is the first to use the term "Starduster" to describe herself, as well as Kud, Shiina Arizuki and Kud's mother, which she translates as "Space Idiot". 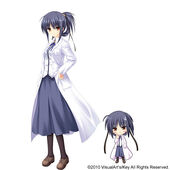 Kud Wafter Version
Add a photo to this gallery

Retrieved from "https://littlebusters.fandom.com/wiki/Yuuki_Himuro?oldid=15026"
Community content is available under CC-BY-SA unless otherwise noted.